Call it an early spring present from the Pennsylvania Fish and Boat Commission.

Once again, those people who

live or fish in the 18-county region of Southeastern Pennsylvania, including the Lehigh Valley (except for Carbon County, which is considered the Northeast Region) will get a two-week jump on trout season.

The rest of the state kicks off trout season 8 a.m., Saturday, April 16. 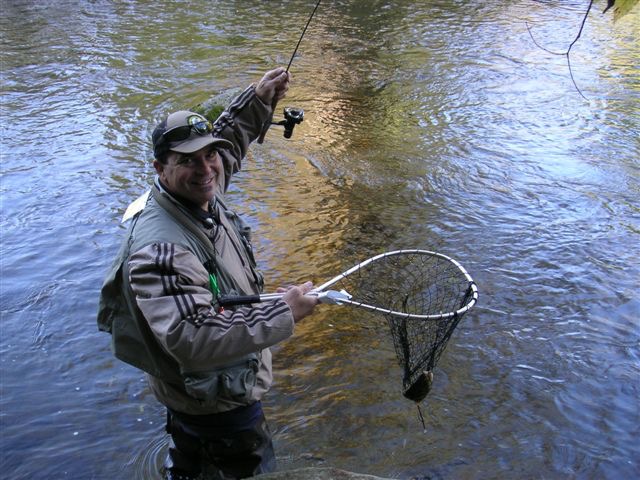 Trout must be a minimum seven inches in length to be considered a “keeper” for your creel, and there is a five-trout limit (brook, brown, rainbow, golden rainbow, lake trout combined) through Sept. 5

You can go with live bait like minnows (39 native species reside in Pennsylvania, including the ever-popular fatheads and shiners), worms like nightcrawlers, grubs like wax worms, or artificial lures and baits like Berkley ® PowerBait ®.

If you’re using minnows as your go-to bait, consider purchasing a good bait bucket, something like the Frabill’s Model 4825 Aerated Bait Bucket (www.frabill.com) which, for less than $25, will keep your bait minnows hearty

thanks to a portable-friendly 1.3-gallon capacity, insulated liner and 20 hours of aeration time on just 2 AA batteries.

If you’d like your photos of great fish published, email them to gblockus@ptd.net along with the person in the photo, the person taking the photo, the type of fish and its size, and where and what it was caught with, and whether or not it was released back into the water.

Willie’s Bait & Tackle, 5105 Main St., Cementon (610-261-2767): Willie says the Lehigh River has a lot of brown trout biting at worms and lures. He took his grandson out for the mentored youth last Saturday and Grant caught and released 10 (brookies, browns and rainbows) on Berkley Pink trout worms near Sacred Heart Assisted Living. Paul Smith of Walnutport caught a 20.5-inch, 4-pound 4-ounce Palomino (golden rainbow) on a salmon egg/nightcrawler mix in the Walnutport Canal. Willie predicts the full length of the Jordan Creek will be hot, and parts of the Hokendauqua have been well stocked so should yield a lot of fish.

Bob’s Wildlife Taxidermy, 4642 Kernsville Road, Orefield (610-398-7609): Bob says the bait tanks are up and running and his shop is fully stocked for all your fishing needs this season. The mentored youth fishing last Saturday was a big hit with medium shiners catching some finicky trophy trout for youngsters, who came to the shop with their parents to have the fish mounted. Leaser Lake has been fully stocked. The Jordan is just a tad on the low side, but if we get the rain and the warm air that’s being predicted, it should be a hot weekend for fishing. The water temps usually reflect the water temperature from the previous 48 hours, so fish should be actively feeding on Saturday and Sunday. The Jordan by the game preserve has been clear and perfect for scouting location. Local anglers on scouting missions are reporting a lot of fish in the local ponds and creeks, with the trout more congregated than they should be. If we get the rain, the water will cloud up and the fish won’t be spooked as easily.

Heritage Fly Shop, 2643 Fish Hatchery Road, Allentown (610-248-8836): Dave says the Little Lehigh has been fully stocked, and the wild fish are biting as well. The bet baits for fly fishing are egg patterns and San Juan worms. Pheasant tails, hare’s ear Zebra midges for the bottom. On top, green flies, midge and blue winged olives. The water is running low and very clear, but could change with the rain.

Indian Creek Farm, 3479 Mango Drive, Danielsville (610-760-0739): Barry says that Indian Creek is open seven days a week through July 4. He had more than 100 anglers at the pond last weekend. He expects this weekend to be even busier and more fruitful for the anglers if the winds hold down.

Mike’s Bait & Sports Shop, 328 East Lawn Rd., Nazareth, (610-759-2905): Mike says the mentored youth Saturday was fantastic. The guys out scouting are seeing a lot of fish in the Bushkill and Monocacy creeks. Walleyes are being caught in the Delaware, and there are some nice trout and muskies in the Lehigh. Pickerel action is hot at Minsi. For the trout opener and the temperature drop, Mike suggests fishing small with Size 16s and wax worms,

Klotz’s Bait Shop, 216 Hess Ave., Hellertown (610-838-7970): Caroline says business is picking up as the trout season gets ready to kick off on Saturday morning. The customers are rearing to go.

One thought on “Trout season kicks off Saturday in Lehigh Valley”